The festivities on the Costa Blanca enjoy of a greatly prestigious reputation among the population of Spain as well as the visitors coming from other countries.  With good reason, this part of the Mediterranean coast houses a high number of residents and tourists (Spanish as well as foreigners), who appreciate the magnificent conditions of the Costa Blanca to enjoy leisure (especially in summer).

Festivities with Mediterranean tradition on the Costa Blanca

The weather, the gastronomy or the health services form an essential attractive of the Costa Blanca.  On the other side, they are also relevant factors which enable the celebration of festivities of high interest on this area of the Valencian Community.

The Main Summer Festivities on the Costa Blanca

Hereunder some of the most highlighted festivities are explained:

Moors and Christians Celebrations in Benissa

In Benissa, the Moors and Christians Celebrations stand out, these celebrations are very typical in the south Mediterranean coast.  On 2015, they are celebrated basically between the 26th and 29th of June, however on the 20th and 25th of June festive acts will also take place.  As in other localities of the region, which also commemorate the battles between the Moors and the Christians, traditional acts (reproducing the fights between both parts, like for example the took of the castle) are alternated with events related with modern leisure for youth (bands, humorous and musical parades...).  In each case, it is a participative festivity and it is increasingly growing.

Javea also celebrates the San Juan (St. John) festivity, mostly known as Fogueres (Borfires, in Valenciano) de Sant Joan.  It is the common ritual and festivity in some Mediterranean towns to welcome the arrival of summer.  A tradition which blends the sea, fire, music, moon and powder together.  During these festivities, which end with the burning of the bonfire and fireworks, all sort of acts take place.  Heifers are released and there are correfocs (parade with fireworks). Moreover, like in other towns of the area, also concerts or special sport activities are organised.

The Saint Celebrations to honour the Virgen de las Nieves in Calpe.

Another town with summer festivities is Calpe with its saint celebrations to honour the Virgen de las Nieves in August. This celebration differs from other interesting festivities of the municipality, like the ones whose protagonists are the Andalusian and the German community.  They have been celebrated since 1940. The Fiestas Committee is in charge of organising the festivities and the Queen and the Court of Honour have a main roll, formed by four generations: the third age, adults, youth and children.

Moors and Christians Celebrations and the Virgen del Carmen in Moraira.

In Teulada-Moraira, during summer, two festivities of great interest for the visitors take place.  The Moors and Christians Celebrations of Moraira on the second weekend of June; and the Saint Celebrations of Moraira in July to honour the Virgen del Carmen. The most important acts are the boat procession, the "Bous a la Mar" bullfights and the firework displays at the sea.

Bous a la Mar in Denia

In Denia, the Bous a la Mar and the saint celebrations to honour the Santísima Sangre (Saint Blood) deserve a special mention.  The first represent an spectacle worth seeing and very original.  The youth of the town dodge the bulls until these fall into the sea.  These are the major festivities for the people of Denia and in 2015 are celebrated from the 4th to the 12th of July.  The Major Festivity, in fact, coincides with the "Día de la Santísima Sangre" (Day of the Saint Blood), the second Wednesday after the San Pedro (St. Peter) Festivity.  The Bous a la Mar, with two daily sessions, are a main ingredient for these festivities. Moreover, it is a Festivity of National Tourist Interest. 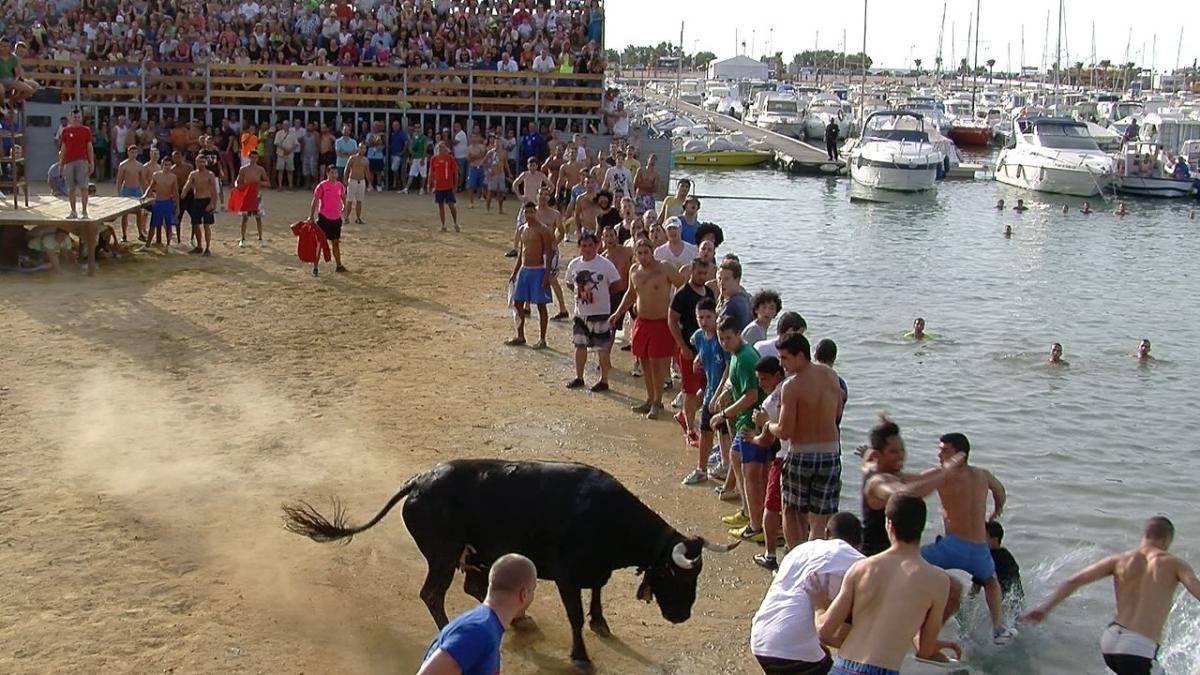 The Fireworks of the Olla in Altea.

The festivities of Altea add to the traditional ingredients of the region (powder, dance and religious acts) the tradition of carrying a poplar to the lower part of the town, where they tie it up with the only help of four ropes.  These are the San Roque festivities and the peculiar tradition of l'Abret (Little tree, in Valenciano).  On the other side, during the San Roque festivities there is an spectacular night firework show.  In fact, there are two highlighted fireworks spectacles: the Cristo (Christ) firework and the one from the Olla de Altea.

Furthermore, an evident attractive of the Costa Blanca is its geographical position.  The proximity of the northern towns of the Costa Blanca (Moraira, Calpe, Benissa, Altea, Javea, Denia,...) to the most important cities of the Valencian Community enables the possibility to visit various festivities in one same day, and some of them are among the most famous in Spain.

The Hogueras de San Juan in Alicante fill with joy the city, its inhabitants and visitors.  The festivity committees of the neighbourhoods fill the streets with bonfires.  Alicante will create a sea of flames to honour the arrival of the summer solstice. The burning of the main bonfire is the most noteworthy, it marks the end of the festivity. During the festivity, the belleas del foc (Queens of the festivity) will parade in the numerous traditional acts, characteristic of these festivities.  At night, the most lively committees offer music and drinks.

Lastly, another festivity that should be visited, at least once in life is the Tomanita de Buñol.  This town is located in the interior of the Valencian Community, near the city of Valencia.  The adrenaline produced by the Tomatina wakes the interest of thousands of tourists every year.  For this reason it is one of the most important tourist attractions in Spain, in general.  A peaceful war with tomatoes which colours in red the streets of the valencian town.  To participate in the Tomanita, for some years now, you have to pay, this also guarantees more security and a wide range of events.

All in all, the Costa Blanca and the cities around form a real paradise for those willing to enjoy intensely the pleasures of life.  In these pleasures, without doubt are the festivities included.

A mild weather, a delicious gastronomy and the strength of the tradition of these Mediterranean towns represent wonderful attractions.