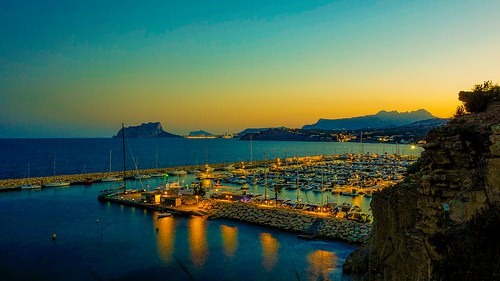 The Costa Blanca is the name of the Mediterranean coast on the South east area of Spain, specifically on the province of Alicante, and which encompasses a wide group of municipalities, from Denia up to Pilar de la Horadada.  In this privileged area of Spain, many tourist destinations stand out such as Javea, Altea, Calpe, Moraira or the city of Benidorm , and the areas of the interior like, Gata de Gorgos, Jesús Pobre or La Vall del Pop, formed by the towns Castell de Castells, Benichembla, Murla, Alcalalí, Parcent, Jalón, Llíber and Senija, this last one is located next to the coastal town Benissa.

The magic of a unique place. Live on the Costa Blanca

With more than 218km of beautiful beaches, cliffs and coves, the Costa Blanca is a first class destination where visitors and residents are fascinated not only by its nature, but also by its traditions, festivities and delicious gastronomy.  There are many reasons to live on the Costa Blanca and to decide to purchase residential houses on this area of Spain.

The Costa Blanca has unbeatable characteristics: its sun conditions and beach make it offer special light and colours.  It offers a temperate climate with dry summer seasons, which is very attractive for the tourist and residential activity.  It has a privileged climate, according to the WHO "one of the most healthy", with more than 2,800 hours of sun per year and a annual temperature average between 17º and 19º.  This fact makes life here meet all the perfect conditions during the entire year to enjoy the sea and open air sports.  The precipitations are scarce; only about 20 days per year because of its situation between mountains.  Moreover, its closeness to the sea results in mild winters.

The Costa Blanca offers 218 km of calm and transparent waters.  Its beaches are characterised for being wide, shallow and crystalline, with a great variety of sport ports, having the Spanish province of Alicante the highest number of beaches prizewinners of the blue flag status in recognition for the quality of the waters, security and services they offer.  Beaches and coves to enjoy the sea on the Costa Blanca

As regards to the surroundings, this area offers a wide range of possibilities, in part produced by its uneven character.  It is the second most mountainous province in Spain.  It has more than ten natural parks, numerous valleys and mountainous areas, which make it a province with unique richness in species and biodiversity.  Visiting mountain ranges such as the Mariola, the Font Roja, the Rock of Ifach or the Montgó, is a pleasure for he body and spirit.  Lagoons like Mata and Torrevieja are also of great beauty.

The natural parks dot the province with local vegetation and unique in Spain which will fascinate visitors.  It also has lush forests considered a protected good, very scarce across Europa, like the one with Lime trees in Sierra Mariola, with spectacular views and a delicious natural herbarium of medicinal and aromatic plants.

Mountains, valleys, cliffs, coves and sand beaches are together in a unique landscape of great beauty on the Spanish Mediterranean Coast.

3. Healthy gastronomy based on the Mediterranean diet.

The third reason for the Costa Blanca to turn into a place of residence is its healthy, varied and delicious gastronomy.  Even though the fishes and seafood such as bass, gilt-head beam or red mullet, among others, are considered star products for its quality and flavour, it is also true that there are fresh fruits and vegetables from the nearby gardens, which will be pleasure for your palate.  Its salting is also very traditional and delicious.  All this, accompanied by the prestigious soup of the area, form a healthy and delicious gastronomy.

The rise is also one of its most elaborated dishes, served in its different varieties, as a banda, dry, caldoso, with vegetables and embutidos (cold meats) in the olleta form.  This last one can also be combined with squid, tune fish, cuttlefish or chicken and lean pork.

In towns and mountainous areas the olletas are very common, formed by embutido, chickpeas, cabbage, lean pork or also the tasty meats like rabbit with garlic and tomato, chops or leg of lamb.

For last, to sweeten meals, nothing better than its famous turrones and ice creams of Jijona, almond or grapes cakes, dates and raisins.

There are many quality restaurants to enjoy this gastronomy and the gastronomic centre of the Costa Blanca is located prominently on the north, specially on the Marina Alta region, with many restaurants awarded with Michelin Stars.  On the top of this list of restaurants is Quique Dacosta in Denia, with three Michelin Stars and considered one of the best restaurants in whole Spain.  Other two restaurants with recognised prestige, each of them with one Michelin Star, are the Restaurante Casa Pepa in Ondara and the restaurant BonAmb in Javea.

Another reason to stay on the Costa Blanca is its festivities and traditions.  One of the most known, the Hogueras de San Juan, are a pleasant form to receive the summer.  This festivities also offer numerous musical, artistic, sport performances or fireworks; an spectacle of light, music and fun in a unique enclave to render cult to the fire.

Another tradition with many centuries of history are the Moors and Christians celebrations, which are celebrated in many towns of Levante, such as Alcoy, and are an spectacle of colour and fun, declared Festivities of International Tourist Interest in 1980.

Moreover, there are other celebrations such as the Mistery of Elche, a Masterpiece of the Oral and Intangible Heritage of Humanity which is celebrated each year in the Basilica of Santa María, among other many festivities and local holidays.

Its rich culture and heritage are other of its great attractives.  On this land many towns have left their distinctive such as the Arabs, Iberian or Romans, leaving a great architectonic, artistic and literary legacy.  The province has a heritage which goes from the prehistoric times with the rock paintings of the Pla de Petracos, to the Roman and Iberian world, with sites such as Lucentum or Alcudia.  The Arab culture has left its presence in impressive castles and fortresses, many of them declared Property of Cultural Interest.

On the other side, its numerous museums and art collections are essential, like the Provincial Museum or the Contemporary Art Museum, as well as Casa Museo Azorín in Monóvar or the Santurario de Santa María Magdalena.  It also counts with three Patrimonies of the Humanity, El Misteri D'Elx, the Palmeral from Elche and the Rock Art from the Mediterranean Arch.

To this the beauty of its towns and cities is added, with historic centres full of history and art, such as the ones in Alicante, Elche, Altea, Denia, Jáveo or Benissa among many others.

The Costa Blanca is a show of natural, heritage and artistic beauty, but also of rich gastronomy, without forgetting the happy and welcoming warmth of its people.  A unique and nearby paradise in which it is not difficult to get lost.