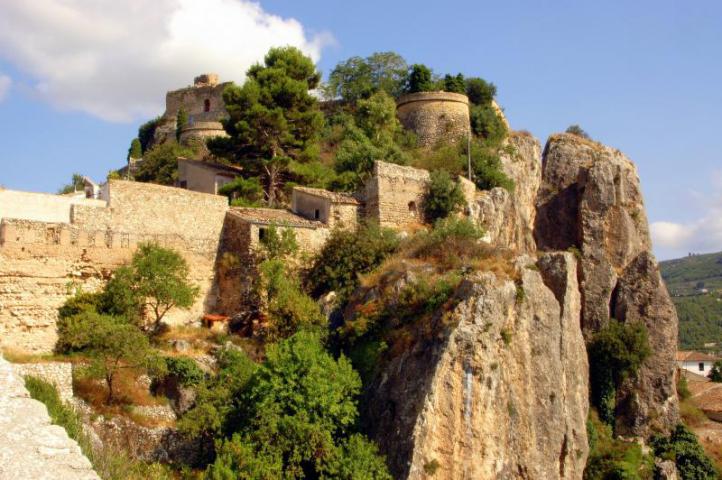 Without doubt, one of the most picturesque ones and with the most charm in Alicante, a must see place, is Guadalest. It is also known as El Castell de Guadalest (The Castle of Guadalest) and is a town which in 2015 has become one of the most beautiful towns in Spain.

Guadalest, a town in the interior of the Costa Blanca which is near the sea.

El Castell de Guadalest, has fantastic connections with some of the main towns of the Costa Blanca, 20 kilometres away from Benidorm, 22 from Altea and 30 from Calpe.

This town only has 200 inhabitants, what makes it a very calm town and full of tourists coming from all parts of the world, who visit it everyday.  British, French, Dutch, German or Russian, who live in the towns on the north of the Costa Blanca, but also Australian or South American come to visit El Castell de Guadalest.  Of course, this municipality receives its name from the Moslem fortification which represents its historic centre.

Guadalest, a town with tourist and cultural interest.

Guadalest is located at the very top of a craggy rock, at an altitude of about 600 Meter, and to enter its historical centre you have to ascend a hill and cross a medieval entrance, carved out on the rock.  This is very common in Guadalest, since its houses are fitted in the rock.  From the top of the craggy rock you overlook the large valley: with the Aitana mountain range on the south, the Xostà an Serrella mountain ranges on the north, and the Mediterranean Sea on the horizon. The bay of Altea can be seen from many parts of the town.

Its historic centre is full of seigniorial houses, like the Orduña house, the first one tourists can see when they arrive, right after crossing the entrance of the town.  This house has an strange history, since, in 1994, its owners, the Cabrera family from Benissa, wanted to sell it to turn it into a hotel.  However, the opposition of the inhabitants made the Town council buy it and, in 1998, the opened it as the Municipal Museum.

A town with the most number of museums per inhabitant of Spain.

One of the most surprising things for tourists is the large amount of museums in Guadalest (up to eight).  There are all type of museums: the Microgigante, the Microminiaturas, the surprising museum of Saleros y Pimienteros (salt-cellars and pepperpots), the Vall de Guadalest Museum of Historical Vehicles, the Ethnic Museum, the Belen Museum and the Museum of Doll Houses.  Many artists have taken root in Guadalest, attracted by its spectacular landscapes, which have served them as inspiration.

The peculiar location of Guadalest and its orography cause very strange situations, like for the example, that the bell tower is separate from the Church.  In the incredulity of the tourists, surely a neighbour explains them that the cemetery is separate, so that, when the bells ring, they can be heard from the new part of the town.  In El Castell de Guadalest is also the cemetery, much higher than the usual in other towns, however their inhabitants say that this way the dead are nearer to the sky.

The Castle is the highest point of Guadalest and, from there, you have wonderful views: to the valley and the reservoir of Guadalest, on one side; and the Mediterraean Sea on the other.  Jaime I conquered it from the Muslims and during the reign of Pedro IV (Pere IV) the castle was fortified.  However, the earthquakes which took place in the Middle Age and the War of Succession destroyed the Castle.  Some canvas on the walls of the castle, the cistern and the Tribute Tower have endured until nowadays.

On their tour along the historic centre of El Castell de Guadalest, the tourists discover the beauty of some streets that maintain the medieval spirit and the architecture. This has made that this town is included in the list of the most beautiful towns in Spain.  The viewpoint on the Square is an obligatory stop, since, from there, you can overlook the reservoir of Guadalest, which provides with water Guadalest as well as other coastal countries and has turned into a basic resource for the life on the Costa Blanca.

Another highlighted aspect of Guadalest is its gastronomy.  During the colder months it is almost obligatory to try the olleta de blat (a typical stew), a stew prepared from wheat flour, and the lovers of good rice will also enjoy in this town of Alicante.  The arròs amd fesols i naps (rice with edible beans and turnip) or the oven-baked rice are characteristic of Guadalest, as well as the stuffed chilli or the mincho, a kind of vegetable pie.  The corn balls or the rabbit with garlic are also essential in the gastronomy of Guadalest, very linked to the products coming from the earth.

Festivities and tradition in Guadalest.

As for the festivities, one of the best moments to visit a town, Guadalest has three significant dates on the calender.  The first one is the nearest week end to the 9th of May, when the San Gregorio festivities take place.  Like in other Spanish localities the 14th and 17th of August, the saint celebrations to honour the Virgin of the Asunción take place; and, the third week end of September is the San Ginés Romeria, to honour Santa Ana and San Joaquín, the owners of the Ginés country house.

The trekking amateurs can find two routes to enter the nature.  Both are perfectly signalled and the road is in perfect conditions, so the only difficulty can be the length of the excursions.  The first is the route PR. V-18, which goes from the reservoir to the top of the Aixorta (13.5km); and the second one is the route PR. V-19 (11.2 km), which separates Guadalest from the same place, but it crosses Castell de Castells, the municipality where the Xaló river is born.  The people who look for something more calm can sail on the reservoir.