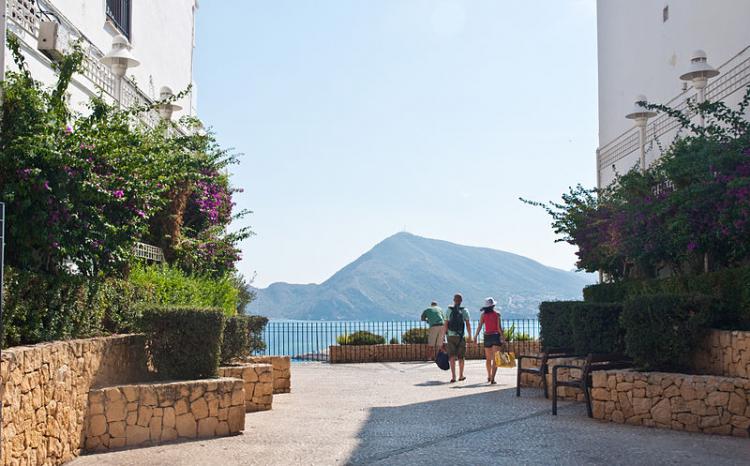 This part of the east Mediterranean Coast embraces, apart from tourism, numerous foreigner residents. They are people who decided to establish its second -or first- residence in its localities, because of their love for the way of life of the area.

There is no doubt, in this regard, that is influencing positively the decrease in the price of the houses in Spain, particularly severe since the crisis arisen from the housing bubble. In 2014 the average price of the free houses decreased a 0.3% and stability is foreseen, in this regard, during 2015. On the other side, according to the Association of Property Registrars, the purchase of the houses by the foreigners reached a record by the end of 2014, reached for fifth year continuous.

The profile of the new residents on the Costa Blanca

These new neighbours have decided to extend their stay on the Costa Blanca beyond the traditional holiday destination. There is an stereotype related to these people, who are often characterised by an age which is over fifty, that they had a high level of studies and income and felt motivated by the climate. Generally these are couples with children.  According to nationalities, stand out the ones coming from the United Kingdom (18.6%), followed by the Scandinavian countries (9.5%), Germany (7.2%), Belgium (6.9%) and Russia (5.8%).

The most attractive aspects of the Marina Alta

As regards to the Costa Blanca, stands out, specially, the area of the Marina Alta, that is to say, the north part of this coast. Some geographical features, very near to the sea, are emblematic in this region. For example, the Rock of Ifach (Calpe), the Cabo La Nao or the Montgó (Denia).

This area still maintains the manifestations of primacy which the agricultural lifestyle had until the middle years of the last century. Since then, theses activities of the inhabitants of the area are coordinated with the tourism, at first of national origin (specially Madrid and Castile), and then foreigners (specially from the Community).

Fortunately, the harmony has been well maintained between the peaceful way of life of the people born in the area and the services the new residents and visitors demand. In short, the Costa Blanca has quality of life.

Along the coast and the interior, numerous residential houses and luxury villas have been built. The foreigner resident stands out for its high-demand. There are also attracted by the quality of the Spanish Health services.

Without doubt, the sea is the principal claim for who decide to live on the Costa Blanca. The average of 320 sunny days per year and the low precipitation registered make this territory ideal to enjoy open air activities. There are many quality beaches, identified through official blue flags. In this aspect, on the Costa Blanca persists the fame of Javea, where beaches like the Granadella and charming coves can be visited. Calpe and Denia also stand out for their beaches, and with a more peaceful atmosphere there are towns like Benissa, Teulada, Moraira or Benitachell.

The architectonic lines of this antique fisher villages have been maintained in some coastal areas and in the historic centres of the cities. The white colour of the houses and the contrast it produces, for example, with the brightness of towns like Altea, historic pole of attraction of painters, really attracts the attention. On another hand, the most picturesque and characteristic construction of the Marina Alta is known as "riurau" and it is formed by an elongated rectangular floor and closed on every side except the one which is orientated towards the sun. They were used for storage and production of raisins. Visitors and new residents really love the feeling of tranquillity and of settling in these urban networks offer.

The gastronomy is another aspect that must be taken into account. Together with the traditionally famous Paella (and other varieties of rices the people from Valencia cook in a traditional way) there are, for example, the red prawns of Denia. The ice creams traditionally made on the Costa Blanca should also not be ignored. As regards to the drinks, in this part of the coast they drink Moscatel wine and Mistela, a liquor coming from grape-juice and from which results an ideal accompaniment for desserts. Among the varied offer of prestigious restaurants you can find the one from the Laureate Quique Dacosta.

The inland, from the Costa Blanca

The Marina Alta does not only have its fame for its coastal area, but inland there are also settings, like the Vall de Pop, where the nature is the protagonist. The sweet wines of Xaló are distilled there and who wants to explore can go to the Cueva del Rull or go up the Cavall Verd, where the Castle the last rebel Moriscos used as shelter, before they were definitely expelled at the beginning of the seventieth century, was located.

The Vall de Pop is a territory marked by the orography its mountain chains, cliffs, valleys and rivers create. It is, therefore, a highly recommended area to plan trekking routes, with local fauna and flora.

In contrast with the relaxed activities also exists a diverse offer of night leisure, both in the classic beach bars as in the discos which are in the towns on the coast. The new neighbours love the liberal environment of the beaches on the Costa Blanca.

In conclusion, the Costa Blanca represents a dream place to enjoy of everyday activities near the sea and with an exceptional quality of life.